Most people just try and lose some weight when it comes to their body. Others might try increasing their height (which you can read more here about how to do that). But some take it to a whole new level. It can be a great thing to transform your body, especially if done safely through things like cosmetic surgery that can help you feel better about yourself and look younger, but some people seem to take the word ‘transform’ too far. From full body tattoos to elf ears and tongue splitting, join us as we take an inquisitive look at the 10 most insane body modifications you just have to see! When it comes to body modification, tattooing is certainly nothing new. In fact the word tattoo was first used by Captain Cook and naturalist Joseph Banks to describe the body art displayed by the natives of Tahiti and New Zealand in 1769. The oldest example of a tattoo was found on the mummy Otzi, whose body was discovered in glacial ice in the Alps. Otzi was found to have 61 tattoos that date back more than 5 300 years.

One of the most impressive examples of a full frame tattoo can be seen on body modification artist Rick Genest. Known at Zombie Boy, Genest decided to get tattooed after recovering from surgery for a brain tumor. Genest then shunned the normal world and began living under bridges, on rooftops and in dumpsters until 2006 when he featured in an article in the body modification publication, ModBlog. Since then, Genest has appeared in several movies, featured in Lady Gaga’s music video Born This Way, Modelled for GQ magazine and L’Oreal and in 2012, became the face of Jay-Z’ fashion label Roc-A-Wear for it’s re-launch in Europe. As far as extreme body modifications go, cheek holes are about as crazy as you can get! German body artist Joe Miggler has capped holes in his cheeks measuring 1.4 inches (3.6 cm) wide! To create his gaping cheek holes, Miggler has had to cut his face on three separate occasions. Each time he inserts a slightly larger ring in the hole to stretch it out. However Miggler isn’t even finished as he eventually wants to widen the holes to 1.5 inches (3.8 cm). Miggler admits that eating food can sometimes be difficult especially soup which just pours out the side of his face, but he simply plugs the holes to avoid spilling any. The holes are so big that Miggler can blow smoke through them and even stick his tongue right out the side of his cheek! Ear shaping or ‘elfing’ is a pseudo medical procedure usually carried out by a body modification artist. This mod can be achieved several ways but the most popular way is to remove a portion of the upper ear then stitch the two exposed edges together. The ear lobe may also be removed to complete the elf ear making it appear more sleek and shapely. Healing times for this procedure vary and can range from weeks up to several months. 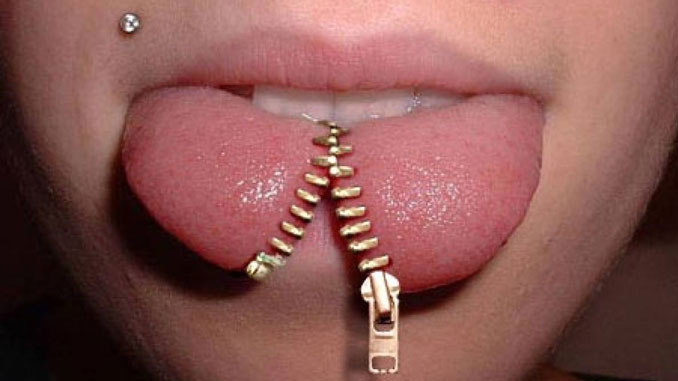 Tongue splitting can be performed by cutting the tongue with a hot scalpel or a laser which splits and cauterizes the two sides of the tongue. Only oral and plastic surgeons are licensed to carry out this procedure however it is not uncommon for some body modification artists to also attempt this operation. Alternatively, a person may split their own tongue using the fishing line method. Firstly, a piercing is made at the base of the tongue which once healed acts as the anchor point for the fishing line. The line is gradually tightened over several weeks, slowly splitting the tongue right down the center. Body piercing has been around for a long time. In fact, earrings have been found amongst the oldest mummified remains dating back more than 5 000 years ago. Even nipple and genital piercing is nothing new with nipple piercing dating back to ancient Roman times while genital piercings were first seen in India around 320 A.D. The most pierced woman in the world is Brazilian born Elaine Davidson. Now a resident of Scotland, Davidson has more than 9 000 body piercings with in excess of 500 piercings in her genitalia alone.