The checker shadow illusion was published by Professor of Vision Scientist, Edward H. Adelson in 1995. It shows an image of a green cylinder casting a shadow across a checker board. Looking at the image, the square labelled ‘A ‘clearly appears to be darker than the square labelled ‘B’. However, both squares are of identical brightness.

Take a look what happens to the two squares when they are joined together below: Take a look at the pieces of wood in this picture. Do you see the two pieces lying next to each other or one on top of the other?

The wood is actually stacked one piece on top of the other but if you look at the far end of the image it appears that they are lying side by side. The optical illusion is created here by the horizontal and vertical screws at opposite ends of the wood and the fact that the man’s hand appears to be resting on top of both pieces of wood at the same time. 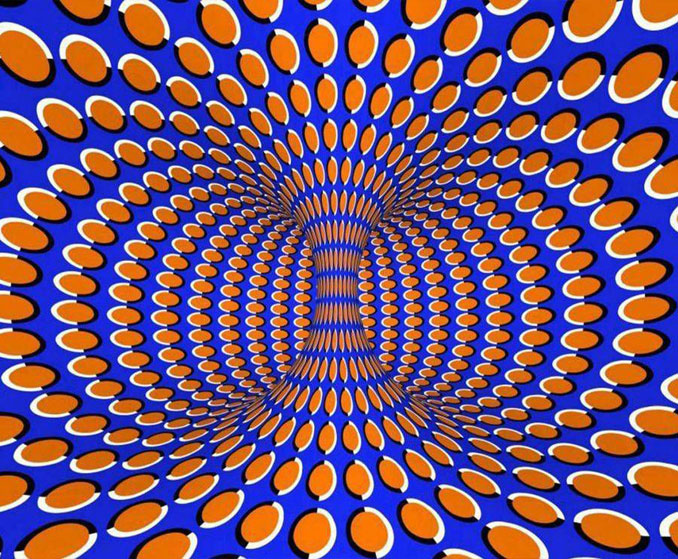 Created by Beau Deeley in 2012, The Spinning Optical Illusion is a static, two dimensional image that actually appears to be rotating. The perception of depth and contrasting colours within this picture create the illusion of movement. Interestingly, if you stare at an individual orange circle for a few seconds the image stops rotating. Much like the blue and black, white and gold dress that divided the internet back in 2015, the blue/green optical illusion is based on a person’s ability to perceive colour.

Believe it or not, the ‘blue’ and ‘green’ lines in the bottom left and top right rectangles of this image are actually the same colour! If you don’t believe it, try opening the image in photoshop and use the eyedropper tool. What do you think? Are the lines blue or green? Let us know in the comments section below! If you stare at the centre of this image without moving your eyes, it will mysteriously fade away. First identified by Swiss physician Ignaz Paul Vital Troxler in 1804, Troxler’s fading is due to unvarying stimulation of the neurons in the visual system. In other words, if an image in front of you does not move while you are viewing it or you do not move your eyes while viewing it, the unvarying stimuli will soon disappear from your awareness.

To get the best effect, stare at the very centre of this image for about 20 seconds. Freaky isn’t it?

That was 10 optical illusions that will bend your brain. Which one did you like the best? Let us know in the comments section below!