These are the world’s largest animals. Forget dinosaurs. These animals are all still alive today! From gigantic dogs and cats to a creepy insect the size of a rabbit, we take a look at the world’s biggest living animals. The Savannah is the world’s largest breed of domestic cat. It is a cross between a standard domestic cat and a serval, an African wild cat. The largest Savannah cat aptly named ‘Trouble’, currently measures in at a whopping 19 inches (48.26 cm) from shoulder to paw. The world’s largest cat is Hercules the liger, a lion/tiger crossbreed. Hercules who currently resides at a wildlife reserve in South Carolina, USA stands an impressive 49 inches (1.24 meters) from paw to shoulder and weighs an incredible 922 pounds (418.21 kg)! Great danes are recognised as the world’s largest dog species with a male usually growing in excess of 30 inches (76.2 cm) tall from paw to shoulder. A great dane named Zeus was recognised as the world’s tallest dog measuring in at an impressive 44 inches (1.12 meters) tall. When Zeus stood on his hind legs he would dwarf his owners standing an unbelievable 7 feet 3 inches (2.21 meters)! The world’s largest goldfish ever caught was this 47.24 inch (1.2 meter) monster! Fisherman Raphael Biagini spent 6 years hunting this elusive fish and it took him more than 10 minutes just to get it out of the water! 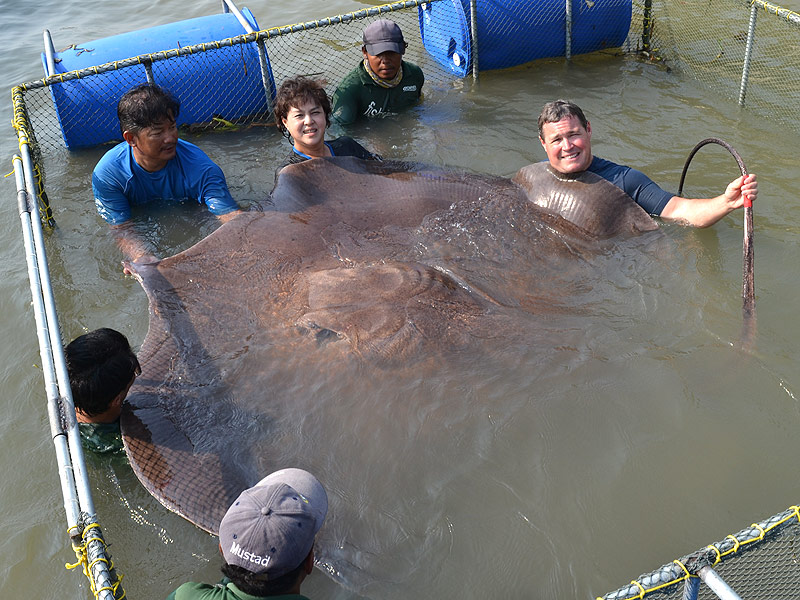 The largest freshwater fish ever caught is believed to be this 14 foot (4.23 meters), 800 pound (362.87 kg) freshwater stingray caught by conservationist, Jeff Corwin. Corwin, who was in Thailand filming a documentary, managed to snatch this behemoth from the murky Mae Klong river using 300 pound (136.08 kg) fishing line and snakefish for bait! The title of biggest fish on the planet goes to the whale shark. Whale sharks can grow up to a mind melting 40 feet (12.19 meters) in length and weigh almost 42000 pounds (more than 19 metric tonnes)! Fortunately for humans these schoolbus sized giants of the ocean feed only on plankton and small fish which they collect by opening their massive jaws and filtering the water as they slowly swim by. The giant weta is a cricket-like insect that can only be found on Little Barrier Island off the coast of New Zealand. These nightmarish creatures were wiped out on the mainland after the introduction of rats by European settlers. This specimen found by former park ranger Mark Moffett weighs as much as three mice and has a wingspan of over 7 inches (17.78cm)! That would have to be one hungry rat to try and eat this thing! I’d rather sniff around for some cheese to munch on instead! The world’s largest snake, a reticulated python was recently caught in the swamplands of Indonesia. This gigantic reptile, currently housed in a zoo on the main Indonesian island of Java, is reported to be a staggering 50 feet (15.24) in length and weigh more than 70 stone (444.52 kg). Reticulated pythons frequently eat small deer and sheep and have even been known to attack and eat people. The snake was caught by Indonesian villagers who, fearing for the safety of their community hunted and captured the beast in a makeshift cage. While great white sharks are not the largest sharks on the planet they are perhaps the most dangerous to man. The largest great white ever believed to be captured on film nicknamed ‘Deep blue’ was filmed back in 2013 off the coast of Mexico. Deep blue is believed to measure in at a nightmarish 20 feet (6.1 meters) in length!

The largest shark is of course the whale shark mentioned above, which is also the world’s largest fish. The largest animal that has ever existed on Earth is the blue whale. Bigger than anything that has come before including every known species of dinosaur, the blue whale can grow up to an enormous 100 feet (30.48 meters) in length and can weigh in at a staggering 396832 pounds (180 metric tonnes)! It’s tongue alone weighs almost 6000 pounds (2721.55kg) which is about the same weight as a medium sized African elephant!

Well there you have it. The world’s largest animals. Guaranteed to give even the largest dinosaurs a run for it’s money!