From a girl caught talking to her dead grandmother to a possessed child standing on the edge of his crib, we count 10 terrifying things caught on baby monitors. Before we look into the 10 various events. Some parents maybe wanting to see which are the best baby monitors out there on the market. Levana Baby Monitor Reviews in 2018 & 2019 will give you all the information that you may need to make your decision. There are a load of different types of baby monitors that you can get though, so you’ll want to make sure that you get the best monitors for your nursery. When this unnamed parent viewed her baby monitors to see if her son was sleeping soundly, she got an awful surprise. Grabbing her phone she managed to capture this unsettling image.

Next to her sleeping son, you can clearly see the disembodied face of another child.

When this photo first surfaced, it was quickly dismissed by skeptics that said the face was probably little more than that of a brother or sister who had climbed into their siblings crib. However, the woman pointed out that her son was an only child and that there was no one else in the house when the photo was taken.

Other viewers also noted that even if the face did belong to another child, it didn’t seem to have a body.

What do you think is going on in this photo? Could it actually be a ghost or is it simply a glitch caused by the baby monitor? Let us know what you think in the comments section below. User redheadedbug posted a chilling story to Reddit claiming that she once heard her 20 month old daughter talking to her stuffed bear through the baby monitor. Redheadedbug said that she was up late one night, browsing the internet when she suddenly heard her daughter’s voice come through the device. She turned to look at the monitor and saw that her daughter was standing in her crib facing away from the screen so she decided to get up and investigate.

When she entered her daughter’s room she saw that she appeared to be talking to someone in the corner of the room. When she asked her who she was talking to, her daughter said that she was talking to her teddy bear. Redheadedbug then told the young girl that the her stuffed bear was not in the corner of the room, it was actually in the crib behind her. The young girl just giggled and replied ‘Silly Mommy!’

Getting fed up, Redheadedbug asked her daughter ‘What bear are you talking to?’ Her daughter then turned and with a very serious face said “No name, no name, shhhhh”.

Redheadedbug was immediately freaked out by her daughter’s response and told her to tell the no-name bear to go home because it was too late to play. She then gave her daughter her pacifier and went back to her own room where she switched off the baby monitor and hid under her covers for the rest of the night. There is very little information available about this photo. It was supposedly captured on a baby monitor by parents who thought that their child was alone in the room. However, the picture clearly shows a hunched figure leaning into the crib. It is thin and gaunt and looks as though it may be aware it is being filmed on the monitor. It also appears that the figure has an open mouth. As if it is screaming.

While the figure seen in this photo could simply a person, distorted by low light and poor camera quality, it still doesn’t explain what they are doing in the child’s bedroom in the middle of the night.

What do you think this baby monitor has captured? Horrible ghoul or grainy hoax? Let us know what you think is going on in this picture. A Washington couple were horrified to discover that a creepy voice had been talking to their son through his baby monitor. Their son, who was 3 at the time had complained he couldn’t sleep because he was scared of the man in his monitor. Worried, the couple checked out the device and discovered that it was following their movements around the room. They then heard the monitor say in a deep and unsettling voice “wake up, little boy! Daddy’s looking for you!”

The couple immediately contacted the manufacturer of the baby monitor who advised them to change their WiFi password immediately. 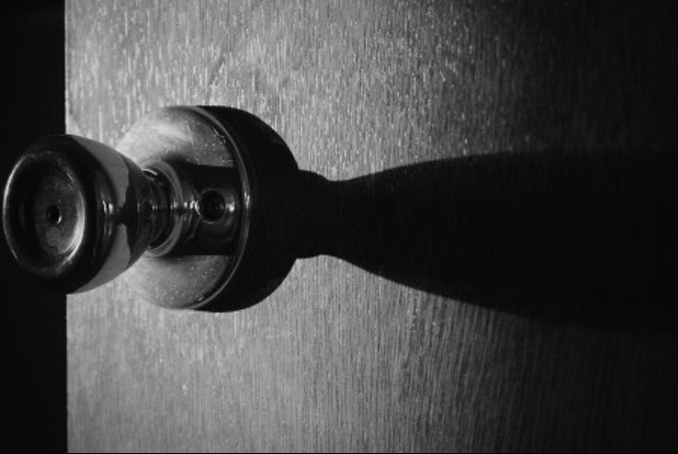 One evening, Reddit user lati4 claimed he was home alone while his parents were at his brothers hockey game, when something so unsettling happened, it still haunted him to this day. He said he was playing Roller Coaster Tycoon on the computer when he suddenly heard a loud noise, similar to a cupboard door closing in the other room. He paused the game and checked the baby monitor that was set up at the top of the stairs. As he was viewing the screen, he heard the front door unlock. ‘My heart dropped, it was eerily quiet.’ He said. ‘The door didn’t open, I just heard it simply unlock.’

He then heard a second noise. This one much louder than the first. It sounded like someone was stomping on the hardwood upstairs. Lati4 was so scared he hid under the computer desk and cried until his parents returned.

When his parents arrived home, they immediately noticed that the door was unlocked and asked their son if he had let anyone into the house. After checking, they did not find anything broken or stolen and the baby monitor was still plugged in.

‘To this day thinking about that night (still) gives me chills.’ He said.