When Reddit user lmbrjack moved into his new house in a suburb of Illinois, he discovered a strange hatch on the wall. When he opened it, he discovered something extremely creepy.

The hatch lead to a narrow area that was designed to store a hot water heater. Behind which, was a small black door.

The door was locked but the Reddit user managed to jemmy his way inside. It led to another room, completely covered from floor to ceiling in soundproofing board and plastic tarp.

The room was completely empty except for an old briefcase and a small black lock box.

He opened the briefcase. There were some envelopes inside that contained paper money from various countries as well as four small silver ingots and an old wooden jewelry box. The box contained two watches and some old rings.

Next he opened the lock box. It was filled with old VHS camcorder tapes. The first one he picked up had the word ‘NO’ written all over it.

He removed the tapes from the box. Below them he found a note written in dripping ink that read “Save Yourself.”

When the photos were first posted to Reddit it caused quite a stir. Some thought it had to be a hoax but the poster claimed that the find was genuine.

Why was the room covered in soundproof boarding and plastic sheeting? What sort of sinister things could have taken place in this secret room? Surely, whatever was on those tapes would reveal the truth. The poster however, was unable to view the videos as he didn’t have a device to watch them on.

Let us know what you think could be on those tapes in the comments section below. 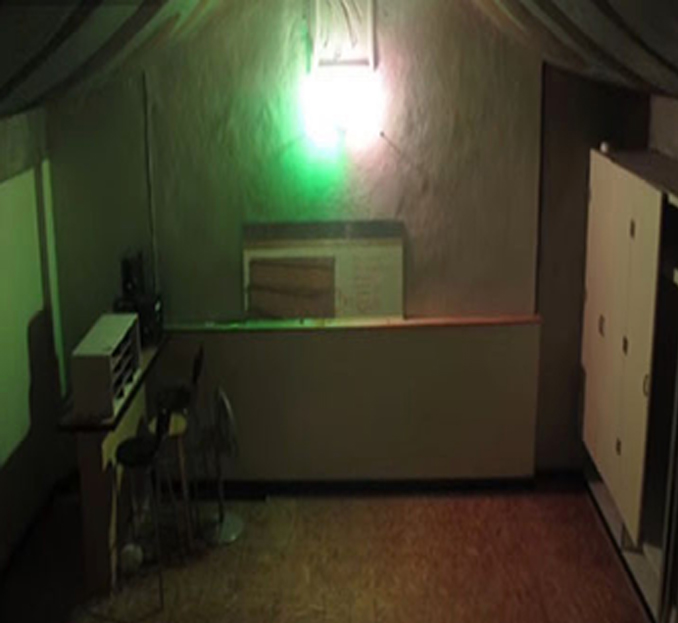 A student, who had recently moved into a house owned by his parents in New Mexico was shocked to discover it had a creepy secret room. When he began to hear banging coming from under the floorboards he decided to investigate.

He discovered that there was a secret door hidden in the pantry which lead to an underground room.

The room, which had working lights, contained a single desk and the remains of a cigarette that had recently been smoked.

Thankfully, after the student discovered the secret room, the mysterious inhabitant never returned. In 2005, Jason and Kerri Brown bought a five bedroom house that was in foreclosure in Greenville, South Carolina. When they began renovations on the house, they discovered a passageway hidden behind some bookcases in one of the bedrooms. The passageway lead to a secret room that contained a chilling note. The note read:

“You Found It! Hello. If you’re reading this, then you found the secret room. I owned this house for a short while and it was discovered to have a serious mold problem. One that actually made my children very sick to the point that we had to move out.”

The note included the email address of the previous resident who urged whoever found the note to contact them.

Concerned that the mold could make someone else sick, George Leventis decided to write a note and hide it in the secret room – a place he knew the realtor would not find it.

The Browns moved out and eventually sued the home loan corporation, claiming that they knew about the toxic mold the whole time. As for the secret room, neither the Browns nor the Leventis’ ever discovered what it was originally used for. Built in the early 1900’s, Singer Castle is located near the Canadian and US border on Dark Island, New York. Originally home to Frederick Gilbert Bourne, president of the Singer sewing machine company, the castle is riddled with secret rooms and passageways. The castle has an underground dungeon and the library even had a secret panel that could be opened by pulling a certain book on one of the shelves.

It was rumored that Bourne used the hidden passageways to eavesdrop on his guests to find out what they really thought of him.

Today, Singer castle is open to the public with guided tours of the many secrets the property holds. If you are game enough, you can even spend the night in one of the many rooms. In 2013, Reddit user demc7 posted several photos of a secret room he found beneath his home. He had recently moved into the building which was an old 19th century English monastery that had been converted into apartments. He noticed there was a wooden hatch in the floor near his bathroom and decided to open it up to see where it led.

At first, he thought it was just a small storage space filled with tools that were left behind by the previous owner, but on closer inspection he realized that the space was actually much larger.

He discovered that there was a series of passageways that lead underneath the entire building. He made his way into and old room that had graffiti on the wall. It meant someone had been down there recently. In the corner or the room was a raised stone area. Perhaps an altar or even a crypt?

He noticed that there was an area in the middle of the floor where the bricks had been removed. Almost as though someone had buried something underneath.

Demc7 claimed that there was no mention of the underground space on his lease and that he had no idea what the mysterious room could have been used for.

What do you think? Was the room part of the old monastery or could it have been built for some other sinister purpose? Let us know in the comments section below.